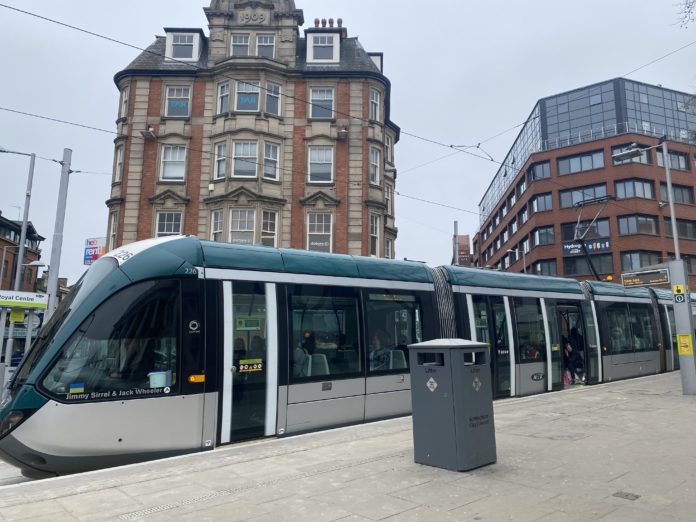 Tram passengers are paying more for their commute following a fare increase from Monday, 28 March.

The increase has been further aggravated by the pandemic, which had seen a significant drop in passengers as people continued to stay at home and travel was less frequent.

Tickets are more expensive for all passengers, with single fares increasing by 20p and day tickets by 30p.

Weekly tickets have also gone up by £1 and monthly tickets by £5.

This also comes after NET announced a new “zero tolerance” campaign to tackle the issue of fare dodgers.

More ticket inspectors are on-board and stationed at tram stops to ramp up ticket checks, and anyone without a valid ticket will be met with an on-the-spot £70 penalty charge – a £20 increase from 2021.

They could also risk a criminal prosecution.

“We have given fair warning on fares and our message is clear: do the right thing and buy a ticket.”

New penalty fares and increased ticket inspection had been implemented in autumn 2021 but the new measures are being stepped up with greater deterrence to catch fare evaders red-handed.

A percentage of the income from the collection of penalty fares will be donated to charities in support of Ukrainian refugees.

Tramlink CEO Tim Hesketh said: ““With tram fares from just £1 it has never been easier to buy a ticket but a small minority of fare evaders continue to take the city and our loyal customers for a ride, so we are stepping up our efforts with a new zero tolerance approach.

“A £70 fine, removal from the tram and the risk of a criminal record should be a clear deterrent to all fare evaders, and our aim is to collect fares not fines. But we will not hesitate to penalise any passengers without a ticket. We have given fair warning on fares and our message is clear: do the right thing and buy a ticket.”

Audio: Kay Matthews, 22, says she no longer takes the tram due to the increased prices

Jane, 75, a tram traveller, said: “I would think that for the general public and the young people, it must be getting very expensive to travel and if that’s the case, the trams will gradually decline and people won’t use it.”

Tickets can be purchased in-person or through the NETGO! app.

Here are the new ticket prices from March 28: