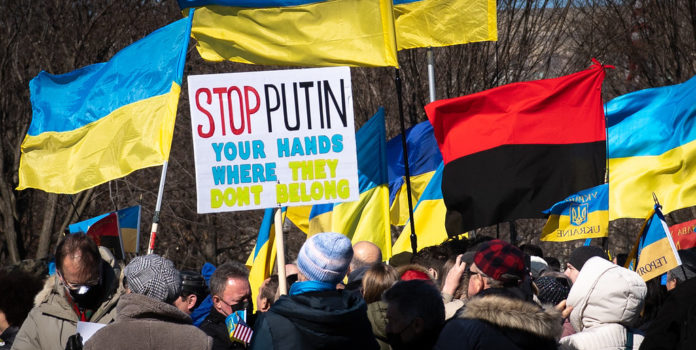 Hundreds of protesters gathered in Nottingham city centre for a demonstration about Russia’s invasion of Ukraine.

They were seen singing the national anthem of Ukraine, called “Glory and Freedom of Ukraine has not Perished”.

Russian President Vladimir Putin ordered the invasion of Ukraine, calling it a “special operation” that has resulted in tens of thousands fleeing the country. Russia has been sanctioned as a result.

However, Zoriana Climenco from Ukraine believes the sanctions are not enough: “Putin has his hands open and he is not scared of anyone,” she said.

Audio: Zoriana Climenco, organiser of Ukraine protest in Nottingham says”sanctions are not enough and the west needs to do a lot more”

Natalia Chigaveska from Ukraine who lives in Nottingham believes that the sanctions will help to break Russia’s regime.

However, the 30-year-old added that “I think it should’ve been done before, it should have all started with Crimea.”

She pleaded for help: “We need to close the sky as we still have people dying every single second, every single hour as we speak.”

The 55-year-old added that he feels quite helpless: “I can’t help it. I feel like I can’t do anything. Yes, I have donated but I wanna do more but what else can I do?”

Audio: Petro Tyminskyj from the Ukraine Culture Centre in Nottingham says he wants to help but he feels helpless