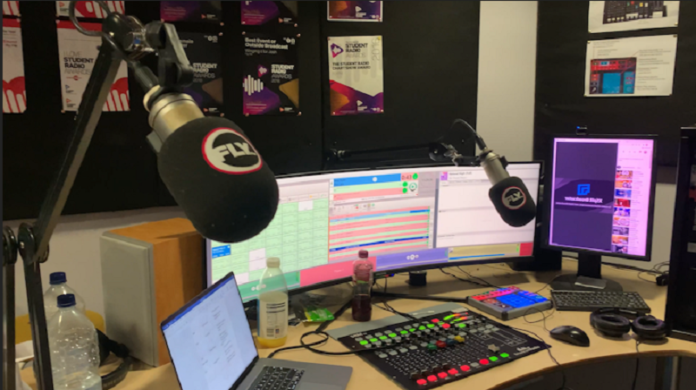 Nottingham Trent University’s student radio station Fly Live is celebrating its 25th anniversary with a 25-hour broadcast, an hour for each year since it started, which began at 1PM on Monday 14 March.

Sitting in the media hub of the city campus’ Students’ Union, in a small radio studio, station manager Harry Briggs prepares for a long stint without sleep presenting to the students of Nottingham Trent campuses.

The show featured presenters such as BBC Radio 1’s Jack Saunders and Alice Dale, Christian Hewgill and Tom and Claire from Capital.

Listeners of the broadcast have also been encouraged to donate to Nottinghamshire Mind, the mental health charity, via Just Giving and you can click here to donate.

Audio: Tom Watts on the importance of the Mind charity

Claire Chambers, Tom’s co-presenter on their Capital show said: “Fly was the opportunity that we needed to get into radio, to practice and to mess about, to make mistakes.

“It’s like a big gang,” she said. “You’ve got a real network of people in the real world and in the grown-up world of radio.”

“It means everything [that past students want to come back] and they’re more than happy to come on as well, which I think is a testament to the platform that Fly creates.

“Everybody’s leapt at the chance to be able to come back on and speak about Fly, which I think says it all, to be honest.”