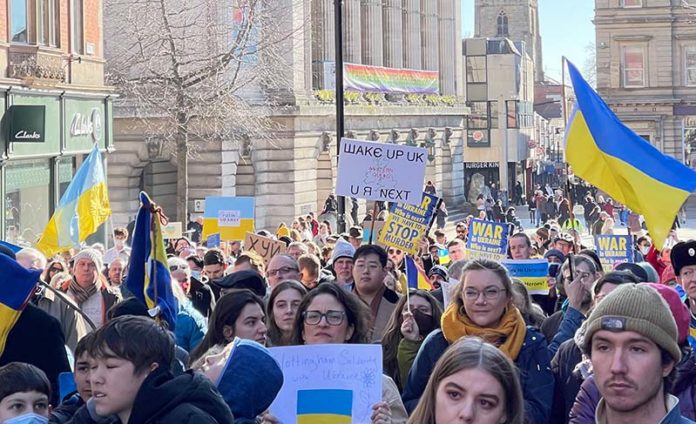 Hundreds of people gathered in Nottingham’s Old Market Square on Sunday 27 February to protest at Russia’s invasion of Ukraine.

Under the Brian Clough statue decorated with a Ukrainian flag, Nottingham residents expressed their concerns about war in Ukraine, along with actions being taken to support those suffering from the ongoing military conflict in Eastern Europe.

“After the Polish government have been preparing to take up to a million Ukrainian refugees, I urge Boris Johnson to do the same.

“We will continue demanding that UK’s government waives all visa restrictions on Ukrainians and to implement toughest possible sanctions including banning Russia from the Swift banking system.

“No matter who the person is, whether it’s a Conservative party member or not, dirty Russian money is not welcome in this country and our government must track it down.”

Video: highlights from speeches at the protest

Councillor Sally Langford expressed solidarity with Ukraine and the Ukrainian residents in Nottingham.

“The Ukrainian community is a very important part of our city,” she said.

“We want to enable you to support your friends and family back in Ukraine and those who want to escape safely.

“We know that this government is not friendly to refugees, but this city is.

“I also stand in solidarity with all those brave Russians who are on streets campaigning against Putin,” she added.

While some speakers echoed optimistic words, others uttered pleas, or expressed their anger.

One member of the Georgian community said: “I completely understand what you are going through. Georgia has been suffering from Russian occupation since 2008, 20% of our country is being occupied and I believe that the protest here in Nottingham is our weapon against Putin’s regime.”

On 24 February 2022, Russia launched a large-scale invasion of Ukraine

So far, it has caused deaths of over 100 Ukrainian soldiers and over 200 civilians

“What they are doing is right, but they need to be acting stronger now, because the sanctions won’t be coming into place for a month or two, and it’s going to be too late as we are already experiencing hundreds of deaths. “

The Help Ukraine Emergency Appeal, organised by Association of Ukrainians in Great Britain, has already raised over £1,100,000.

“It’s absolutely amazing, I have the phone for this organisation and it’s not stopped with people calling and wanting to donate,” Oksana Holod added.

As at the opening, the protest ended with the singing of the Ukrainian national anthem and the greeting “Slava Ukraini!” (“Glory to Ukraine!”).

The next protest is to take place on Sunday, 6 March at 12 noon in the same place.