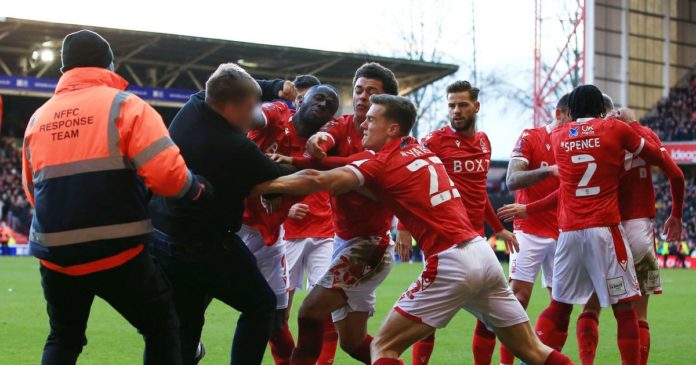 The incident occurred during an FA Cup tie between Nottingham Forest and Leicester City at the City Ground on Sunday 6th February.

The supporter ran onto the pitch after the home side had scored their third goal, in a 4-1 victory, and threw punches at players.

Disgraceful behaviour from this Leicester fan after Forest scored!

Give him a lifetime ban now! 😡#FACup pic.twitter.com/m1yXyG2ucB

Toner was sentenced to four months at a young offenders’ institute and will be released after two months on licence.

He was also given the maximum football banning order of ten years.

A man who assaulted three Nottingham Forest players during the team’s FA Cup clash with Leicester City has been jailed.

The 19-year-old took cocaine on the Friday before the match and then drank beer and spirits from 11am before the 4pm kick-off on Saturday, February 6.

Giving evidence in court, Toner said, “I was under the influence of alcohol, having started drinking at 11am. I was not myself.

“It was probably the adrenaline that kicked in.”

Nottingham Forest fans had their say on the sentencing.

At the hearing, Prosecutor Sanjay Jerath stated, “I am sure Leicester City do not condone this behaviour. He [Toner] has tarnished their reputation.”

Residents of Nottingham had plenty to say on the sentencing.

Life-long Nottingham Forest fan, Andy Hallam, 65, expressed his concerns on the sentencing and on the general behaviour of Leicester City fans in the city centre prior to kick off.

On the day of the match, Leicester City fans also attacked the Fat Cat restaurant in Nottingham’s City Centre. Chairs were thrown at the glass windows and it was a frightening ordeal. Children as young as six and seven-years-old witnessed the event.

Extensive damage to Fat Cat in Nottingham after a group of alleged LCFC fans threw chairs and tables at the doors and windows ahead of today’s FA clash. Manager said up to 60 were chanting Leicester City. No one injured fortunately. pic.twitter.com/dzI02wBT6Y

Megan James was working at the Fat Cat restaurant at the time it happened.

After the match, a Leicester City spokesman said, “The club is appalled by such behaviour and offers its apologies to Nottingham Forest and its players whose safety was compromised. We applaud the swift action taken by City Ground stewards in apprehending the individual involved, who will be subject to a lifetime ban from all Leicester City fixtures at home and away.”

Judge Leo Pyle added that Toner’s actions were “frankly an outrage and could easily have sparked public disorder”.

Judge Pyle also said, “Yes, it was a local derby, but you knew you had the possibility of the euphoria of a win or the devastation of a loss.”

Football fans had their say on Leicester City’s fans’ behaviour.

Outlining the facts of the case, prosecutor Sanjay Jerath said, “The match had already been deemed as a high-risk fixture.”

In mitigation, Toner’s solicitor Kally Sahota said the Leicester fan was ’embarrassed’. He said, “I’m sure the media will want to use the phrase ‘yob’ or ‘hooligan’ but that is not what he is.”

Goals from Philip Zinckernagel, Brennan Johnson, Joe Worrall and Djed Spence secured a comfortable victory for Forest against Leicester. The Reds will now host Huddersfield in the fifth round of the competition on March 7.