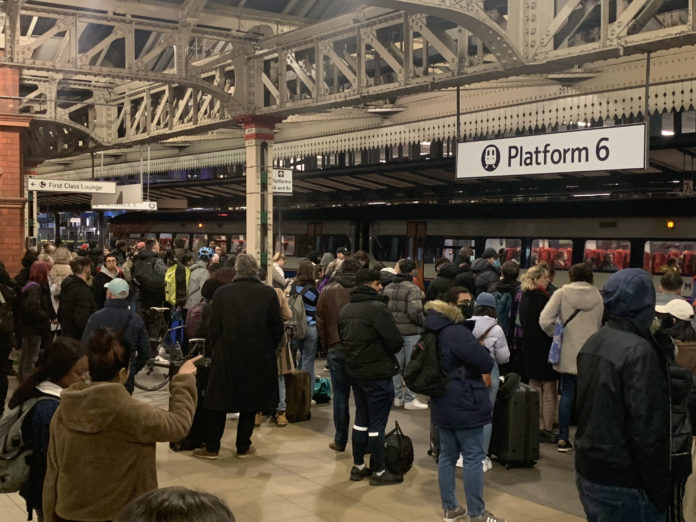 Anna Church, a senior meteorologist, who presents the weather for BBC East Midlands Today has stressed how important it is that people take the current weather warnings seriously.

“It may all be calm at the moment but that won’t be the case later.

“We really need our listeners and viewers across the region to take the warnings seriously,” she said.

Video: Large Numbers of people waiting on the platform, waiting for the train.

The Met Office has issued an amber warning for the Midlands with strong winds, potentially reaching 70 to 80mph today.

Other parts of the country, such as the southern coast have a red warning, which will see winds up to 70 to 90mph and people across the south and the UK have been urged to stay indoors.

London has been issued a red weather warning for the first time ever.

Eunice is being described as the worst storm to hit the UK in 30 years.

“We need to not become complacent by the calm now and we don’t want the warnings ignored,” Church said.

“We are not just talking about protecting your wheElie bins, this is one of The most serious storms some of us will have witnessed in ouR lives.”
Anna Church, BBC Weather Presenter

East Midlands Rail asked passengers to complete their journeys on Thursday evening as they would be running fewer trains due to the risk of flying debris from the high winds over the weekend.

Trains from Nottingham to London last night were packed full of people as they hurried to get home.

One passenger, who pre-booked a seat to London St. Pancras was told that she was unlikely to get her booked seat due to the volume of people trying to get onto the train.

Audio: Announcement on the train.

“If you do have to travel, please take extra care on the roads”.

Parks and attractions across Nottingham and the East Midlands have announced closures and outdoor markets have been cancelled.

Outdoor markets have also been cancelled in Bullwell, Clifton and Mansfield.

Nottingham City Council also announced that all of its parks would be closed.