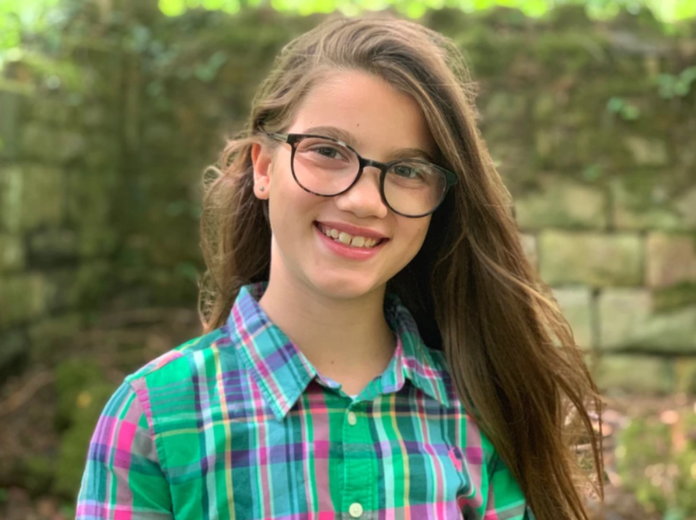 The film is about a Columbian girl named Mirabel, who is born into a family where each family member has a special power.

Lowri has been dependent on wearing glasses and as a Disney lover, not seeing a princess wearing them made her question her beauty.

“Am I not a princess? Am I not beautiful? Do I not fit into that category?”
Lowri Moore

A year before Lowri wrote the letter she had mentioned to her mother, that it really wasn’t right that none of the characters in Disney wore glasses.

Lowri said, “I’m the only one in my family who wears glasses.

“Am I not a princess? Am I not beautiful? Do I not fit into that category?”

She added, “I didn’t want young boys and girls to feel how I felt.”

Lowri was delighted to be able to talk to Jared Bush, the director of Encanto, on BBC Radio Nottingham after waiting three years for a response.

Mr Bush tweeted that he wanted to contact Lowri to tell her about the new character they were creating but was unable to do so at the time because the film was still under wraps.

3 years ago, Lowri wrote Disney asking for a heroine w/ glasses. I couldn’t say that her wish was already coming true! BUT watch the clip for the answer to a big question: Why doesn’t Julieta “fix” Mirabel or Agustín’s eyesight. It’s who they are & she wouldn’t want to change it. https://t.co/WloQDjGFds

Cyrilyn Moore, Lowri’s mother, said, “I think just like every other little girl, she’s always been interested in Disney.

“Normally characters that wear glasses, are stereotyped as geeky and nerdy.”

She added, “Lowri wanted to write to Disney to encourage them to create some positive characters so that young boys and girls would feel beautiful wearing them.”

Cyrilyn said, “She’s so genuine and humble. All she ever wanted to do was make a difference.

“She realised that she is beautiful and her glasses didn’t change that.”

Lowri has also written her own book, ‘Princess Rose and the Golden Glasses’… This book has been published not only in the UK but in Japan too.

On Lowri’s website @lowrimoore.com, she said that she hopes her book helps everyone who reads it, with its message of self-acceptance and true beauty.

Princess Rose and the Golden Glasses gives 30% of its profit to a charity run by Lowri’s parents.

The charity is called ‘Operation Orphan’ and helps orphans across the world access glasses if they need them and also attend eye tests.

Lowri hopes that the donations will give thousands of children the opportunity to see clearly as a result of her letter to Disney.