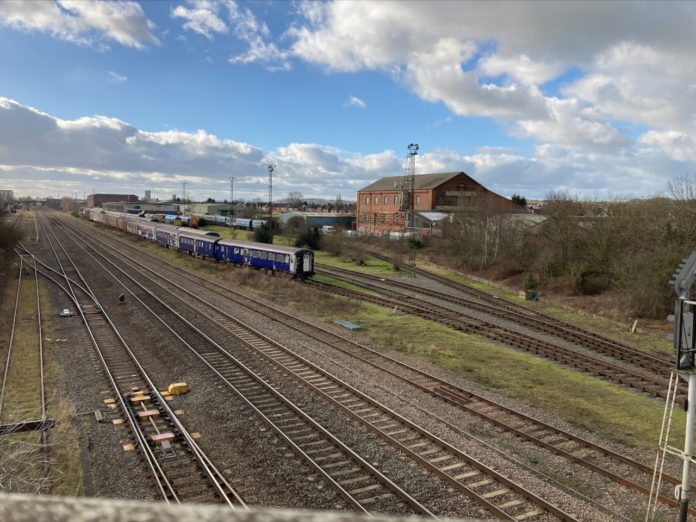 Construction of the first section of the new HS2 route in East Staffordshire is set to start later this year.

There has been a mixed response from local residents to the new railway line, which has been the centre of political debate for a number of years.

It has been suggested that the new line will speed up travel times, create new jobs and build a low carbon, high capacity railway that will change the way we travel in Britain.

One of the proposed routes is set to link the West Midlands and the North West, passing through Staffordshire in the process.

STOPHS2, a campaign group against the project, says construction will lead to the destruction of wildlife, people being forced out of their homes and uncertainty around passenger numbers.

She says the new infrastructure is a waste of money.

“We’ve seen already the impact that it has had on our wildlife and on our countryside.

“These HS2 workers that pride themselves on their green job but they can’t even water the trees that they are planting.

“At the moment, it takes me an hour and a half to get from my town to London. It costs me £30 for a ticket. I think that is pretty good.

“If I did want to use HS2, and save 20-30 minutes on my journey time, I’d have to go to my train station and get on a train to Birmingham. Then walk 10 minutes to their new station to get on a train that goes back through my town to get to London.

“They’re branding it as this carbon-neutral project with low carbon emissions which is going to be good for the planet, but if we are destroying something irreplaceable, how could that possibly be carbon-neutral?” she said.

However, the government are keen to publicise the economic benefits that HS2 could bring to the Midlands and North of England.

According to data released in 2019, the High-Speed Rail Network will create half a million jobs.

“The headline benefit of HS2 is that it provides city-to-city connections,” said Andy Clarke from Midlands Connect.

“Having those initial HS2 services gives a benefit to the other routes. For example, if you take London to Manchester, those trains will now run on HS2 and the big benefit for Staffordshire is that there will be space for other services to run.

“There should be more opportunities for the people in Staffordshire to travel to town and cities.”

With the proposed rail links set to be completed by 2040, it is estimated it will bring in £6.4 billion into the UK Economy.

However, there are mixed views on the project amongst the residents who will be most affected by the introduction of the network.

“It is pretty much a white elephant considering most people are now working from home,” said Jez.

AUDIO: People in Burton-upon-Trent share their views on HS2.

“It is a total waste of money and it should have been spent on regional railways,” said Christine.

Although, some believe that HS2 will dramatically improve the UK’s rail network.

“I think the rail infrastructure within this country in comparison to other countries is archaic. Once they get the whole thing put together, with connecting systems, it is going to be of benefit to the country,” said Lyndon.