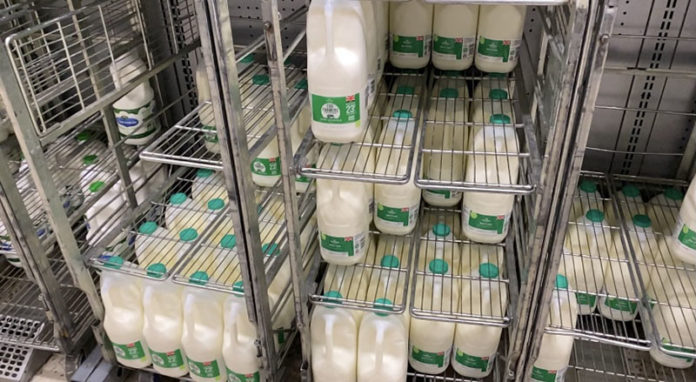 Morrisons are asking customers to use the “sniff test” to check their milk is still in date, after the decision to scrap “use by” labels in a bid to tackle food wastage.

Morrisons will be the first supermarket in the UK to switch the ‘use by’ date in favour of ‘best before’ on milk. Milk is one of the most wasted food products in the UK so in an attempt to try to cut wastage the company is encouraging a look, smell, taste and don’t waste test.

Morrisons customers in Gamston, for the most part, support the decision.

Audio: Morrisons customers express their thoughts on the change in milk labelling

Research by food waste charity WRAP shows 330,000 tonnes of milk are thrown away each year in the UK. 90% of this is thrown away in our own homes. In an effort to stop pints of milk ending up down the plughole, Morrisons will be changing its ‘use by’ labels on milk to ‘best before’ by the end of January.

“330,000 tonnes of milk are thrown away each year in the UK”
Wrap, Food Waste Charity

The ‘use by’ date has to be put on all food and drink products that are dangerous to consume after the date labelled. However milk is still safe to consume after this date, and regulator the Food Standards Agency is allowing Morrison’s new approach.

Cathy, who works at White Post Farm, near Mansfield, looks after dairy cows daily and supports the idea of mixing up milk’s labelling.

Cathy explains “When the cows are milked, the milk goes through a process called pasteurisation. All that means is that they heat it to a really, really high temperature and then drop it down to a low temperature really quickly.”

“All that does is kill all the nastiness in the milk. Any bacteria, germs, anything that could cause disease or potential illness. Pasteurisation gets rid of all that. It’s a really thorough process and that’s why the milk in the shops is safe to drink.”

She continues “Some farmers, obviously this is not recommended, but some farmers still drink raw milk without it being pasteurised at all. It really does depend on personal opinion.”

No doubt other supermarkets will be watching Morrisons labelling change carefully and assessing whether it really will save waste, and crucially money, before deciding whether to follow in their footsteps, after years of following ‘use by’ dates.

Click below too see why Morrisons are scrapping the ‘use by’ date on milk: