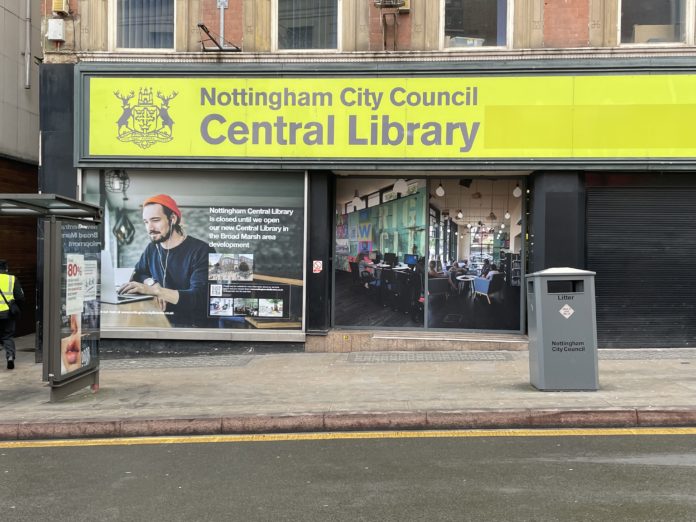 Three libraries in Nottingham are under threat of closure due to proposals set to be brought forward by the city council.

The libraries in question are the joint Radford and Lenton centre and the one in Basford.

Aspley’s Library would also shut, but would become a new distribution point for some of the councils’ services. This includes the home library service, where books are delivered the people who cannot go to a library for a reason, and the Bookstart initiative, which supplies books to early-aged children.

The move is due to the council’s financial issues as well as the apparent low use of the named-centres. It’s also suggested these facilities are not fit for development and improvement.

A consultation is scheduled at the next city council meeting on Tuesday, January 18.

People using libraries decreases, but use of online services increases

The council will also discuss ways of modernising library services in Nottingham. This includes ways to improve online services available to people and even the possibility of sharing spaces.

It comes following a draft report put together by the council which found that fewer people had been using libraries over the last decade.

It also found that more people were using more the councils online material. There had been more than a 300% increase over the last two years. This is due to the Coronavirus pandemic, which caused libraries to close. This has also led to a huge increase in people accessing resources online.

It also highlighted the costs of libraries in Nottingham were higher than other cities in the countries. While the new Central Library, based at the Broadmarsh development centre, is seen as value for money, centres which were seen to have ‘low usage’ have pushed up costs.

The report recommended facilities that were unable to modernise, such as the three mentioned above, would have to close, to bring costs to a similar level to other local authorities

If councillors vote in favour of the proposals a twelve-week public consultation will then take place.

Portfolio Holder for Leisure, Culture and Schools at Nottingham City Council, Councillor Eunice Campbell-Clark said, “The council has a strong track record for investing in our library service, but the financial situation means we have some difficult decisions to make.

“It’s clear that as well as making savings to ensure we have a service that is financially sustainable, we need to adapt our libraries so they meet the needs of the future.”