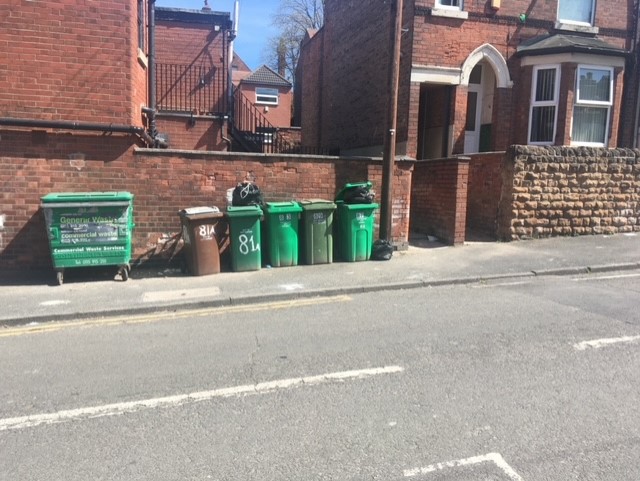 Lockdown has been the cause of many unprecedented issues but who would have thought that the pandemic would leave many residents on and around Ilkeston Road without their bins emptied since before Christmas?

Collections were suspended because of “unprecedented levels of infection of Covid-19”, the local authority has said in a statement on Nottingham City Council website.

In some places only certain streets have been missed and in others areas, such as Ilkeston Road, they have had their bins neglected for nearly 5 months.

The issue is supposedly as a result of staff shortages and needing to focus numbers on regular waste collections.

The message on Nottingham City Council’s website has reassured residents with the following message:

“We have been unable to collect from your street on the scheduled collection due to unforeseen circumstances. This has already been reported and a crew will return as soon as possible.”

Where individual bins have been missed, residents were asked to wait until their next scheduled collection. For most residents this is every two weeks but this statement was made in January and fast forward now to April, many residents are still waiting.

“the bins are always filled to the brim and this has attracted rats, which is really stressful and gross” – Saffron Sadiq, Resident.

A student flat in Ilkeston Road is just one of many where residents have been patiently waiting for the situation to be resolved.

Saffron Sadiq, a 23-year-old history student at Nottingham University, says “The bins are always filled to the brim and this has attracted rats, which is really stressful and gross.”

She says they contacted the council on multiple occasions but she guessed “because they were receiving so many calls about this they actually just cut off their phone lines so you can’t contact them and complain about anything now, let alone the bins”.

“We understand when bins are missed that it is frustrating for residents and we do everything we can to avoid it” – Nottingham Council spokesperson.

CBJ News contacted the city council for an interview which was declined and instead we received this statement from a city council spokesperson:

“We understand when bins are missed that it is frustrating for residents and we do everything we can to avoid it.

“However, it’s not accurate to suggest that bins haven’t been collected for up to six weeks in that location. Collections have taken place, albeit there may have been some disruption to the normal service over a six week period.

“It’s also the case that all the domestic waste and recycled waste was collected a week ago.

“We would ask people to bear with our bin crews at the moment because Covid has led to personnel changes which means they may not always be familiar with their round.
“They are also having to deal with extra domestic waste with more people working from home during the pandemic. If bins are missed, we apologise and advise residents to report it by calling 0115 915 2000.”