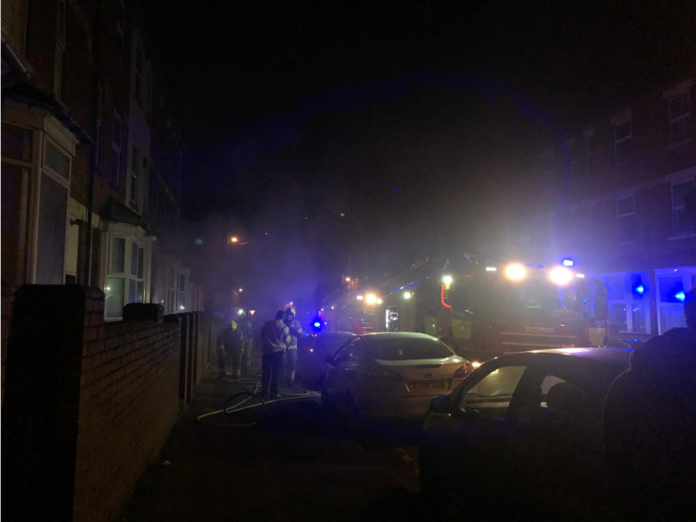 Fire crews found 60 cannabis plants inside a house in a Nottingham suburb and residents living nearby were told to evacuate their homes.

Nottinghamshire Fire and Rescue Service were called to Birkin Avenue, Hyson Green Oin the early hours of Saturday,  April 17. The fire was put out quickly and no one was inside the property.

Inside Nottinghamshire Police found 60 cannabis plants on the first floor  as well as hydroponic growing equipment, and the electricity had been bypassed.

Residents were able to return to their homes a sort while later and an investigation is being carried out into the cause of the fire.

Chief Inspector Riz Khan of Nottinghamshire Police said: “Cannabis cultivation often leads to a number of risks to the community including the threat of fire which can impact on unsuspecting neighbours.

“We also know from experience that they can lead to burglaries and home invasions by criminals trying to steal the drugs.

“That is why community intelligence about cannabis cultivation is vital and people can be reassured we will act on this information to keep people safe.”

“Initially I was worried that there were people inside the house and that they could get seriously hurt”.

“I heard three consecutive loud bangs which confused me a lot because it was an unusual sound and it was not something I usually hear in the area. I went outside because I saw that some of my neighbours were outside.

“When I went outside I saw black smoke coming from the house and through the window. Some of the neighbours were banging on the front door, hoping that whoever was in the house would come out but the thing that concerned us all was that no one came out.

“Initially I was worried that there were people inside the house and that they could get seriously hurt. I was scared and worried because this isn’t something you see or experience every day.

“One of the neighbours called the fire service and they arrived very shortly and after that the police and ambulance came as well.

“We were all standing outside for over half and hour and a bunch of firefighters went into the house and they quickly put the fire out.

“Once the fire brigade came I felt reassured that everything will be okay but I was still very shaken and still a bit traumatised from the incident because I’ve never experienced something like that before.

“The next day I kept looking for any updates or new information on the fire and that’s when I saw the police statement. It said that they found 60 cannabis plants.

“I was shocked that something like that was going on in my street. It made me feel worried and unsure of what to do. I didn’t know if I felt safe any more.

“I am okay now but I will definitely be more wary of my surroundings because it was a very traumatic experience. I am just glad that no one was hurt during the incident and I hope to never go through something like that again.

“Now looking back I was so stressed out. All the residents on the street were in their night gowns and we were all helpless and worried that someone is probably in the house during the fire and that they could be potentially hurt. All we could see was the black smoke so we really didn’t know what to do.

“When I saw the three fire trucks and the other emergency services arrive at the scene, I just knew something wasn’t right. It just made me feel uneasy and I could not sleep for the rest of the night, but now that it has been a couple of days since the incident, I feel better.

“I just hope to never experience this again.”.

Nottinghamshire Police are urging anyone who witnessed anything suspicious in the area to contact them.