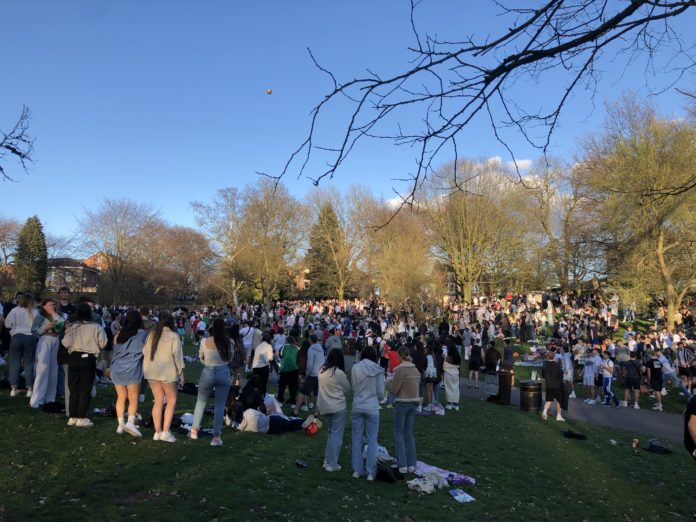 A resident has said she was “scared for her life” after witnessing large crowds of people fighting and drinking in a Nottingham park.

Videos and images have been shared over social media of people fighting at the Arboretum.

Hundreds of people were seen enjoying the high temperatures and sunshine in the park.

The government’s “stay at home” laws were replaced with guidance to “stay local”.

Mary Cobham who has lived in the area for more than 50 years said she had never witnessed anything like it: “I had to leave the park as I was scared for my life, once they all started to crowd around one another, causing havoc.”

Harriet Harding, a student at Nottingham Trent University who was at the Arboretum, said: “I was enjoying myself in the beautiful spring weather when three fights broke out around me.

“Me and my friends were so scared to move, we didn’t want to get caught in the crossfire.”

Councillor Rebecca Langton who represents the Bilborough ward took to social media to share her concern at what happened in the Arboretum and how Nottingham City Council will be moving forward to prevent any scenes like this taking place in the future.

The Council have been in touch with the Police and there will be increased presence in our parks. We will be seizing alcohol on entry into our parks today- please don’t bring it. It’s a shame that a minority of people spoil these nice days for the rest of us (2/4)

Signs have been added to the Arboretum to warn people that drinking alcohol is prohibited in the area.

Simon Parkes, a University of Nottingham student, had welcomed the government’s further easing of restrictions.

He said: “You can’t expect people to stay inside and not socialise when we have weather like this.

“No one is going to think to themselves that there are too many of us and that we need to socially distance.

“We’ve been locked up for ages – it’s about time we were freed.”

Video: Simon Parkes, a Nottingham University student, speaks about the large groups at the Arboretum

On March 30, 2021, witnesses reported seeing police stationed inside and outside the Arboretum and the Forest Recreation Ground.

Officers were spotted checking members of the public for alcohol.

The city council has spoken to senior police officers and said “there will be increased presence in our parks.

“Drinking alcohol in public spaces is not permitted in Nottingham and will be seized on entry.”

City council leader David Mellen said: “The roadmap is a cautious way out of this terrible situation and we all need to abide strictly to its rules.

“They currently allow up to six people or two households to meet outside – but other necessary precautions such as social distancing remain in place.

Video: mass gatherings at the Arboretum in Nottingham

“We need everyone to take on their own personal responsibility as the roadmap gradually grants us more freedom.”

He added that everyone had to “take personal responsibility for sticking to rules as they are eased.

“The scenes from the Arboretum are extremely disappointing, with a selfish minority abusing the easing of restrictions and spoiling it for others.

“We have all made sacrifices over the last year to keep each other safe. Over 600 local people have died due to the virus.

“We owe it to their families, to each other and to frontline workers not to jeopardise the strides we have made towards reducing the spread of Covid by acting so thoughtlessly and recklessly.”

The aftermath of big group gatherings led to bins overflowing and litter scattered across the park.

“It’s also totally unacceptable for people to litter our parks in this way,” said Councillor Mellen.

“Parks have been a lifeline for many during the pandemic and our staff have worked tirelessly to keep them open, clean and safe.

“It’s not too much to ask that if bins are full, people take their rubbish away with them and dispose of it responsibly.

“I’m grateful to both universities who have offered help to clean up today. We want our parks to remain somewhere everyone can enjoy.”