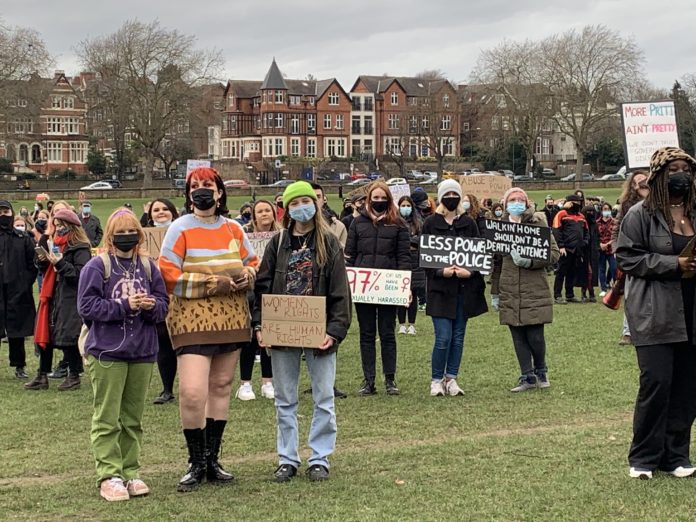 Hundreds of people gathered at Forest Recreation Ground, Nottingham for a Kill The Bill protest on Saturday, 27 March.

The Bill is the proposed Police, Crime, Sentencing and Courts Bill which would give more power to put conditions on static protests.

Nottingham’s Extinction Rebellion group made a statement before the protest saying it had “a deep commitment to non-violence”.

Tanya Myers, from Extinction Rebellion Nottingham, who spoke at the protest, described it as an “intimate affair”. When asked why she was taking part in the protest, she replied that it was “the normalisation of sexual harassment” that “brought [her] here”.

She added that “it’s a point in time that we need radical change” and that we “have to fight this”.

At a time when Covid-19 is still very much present, Myers said people were being “very responsible” during the protest and “you can see the distance between people in the crowd”.

A group of University of Nottingham students who attended the protest and are part of a feminism group said they were there to “pay their respects” to Sarah Everard, a 33-year-old woman whose body was found on Clapham Common.

A Met Police officer is due to go on trial accused of the kidnap and murder of Sarah Everard.

She added: “When they (the government) try to take away our rights to protest it’s important that we combat that by protesting peacefully.”

No arrests were made during the protest.