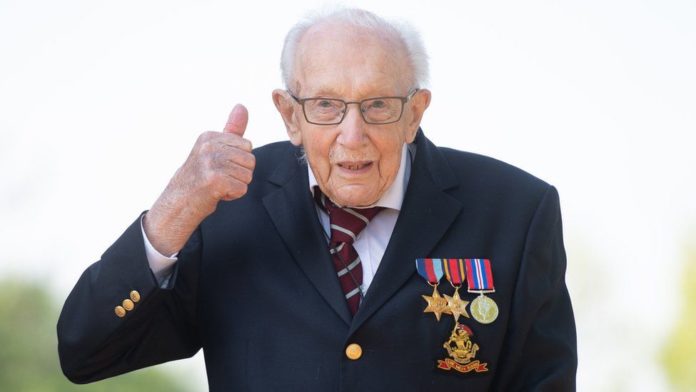 As Captain Sir Tom Moore sadly passed away from Coronavirus this week, the nation came together for a minute of applause to remember him.

He had an extraordinary life. From being a serving officer in World War Two to raising over 39 million pounds in the last twelve months for the NHS,  Captain Sir Tom Moore won the hearts of the nation.

He came to public attention after he set himself a challenge of raising £1,000 before his 100th birthday by doing 100 laps of his garden. It was then broadcast on social media and most of the country felt they had to get involved and help.

At 100 years old, the late Captain Tom Moore raised 33 million pounds ($45 million) for Britain's NHS by walking laps in his garden. His example is inspiring others. @cfmco #InspiringPhilanthropy https://t.co/byrYIIUTaD

The Queen was among those who paid tribute to Captain Sir Tom Moore this week as she recognised how he was able to inspire the nation during the darkest of times.

Boris Johnson also spoke personally to Captain Moore’s daughter to pass on his own personal condolences.

People across the U.K. stopped at 6:00 P.M. yesterday to clap for Captain Tom Moore, who passed away this week. He’s the 100-year-old veteran who raised over $40 million walking back and forth across his patio last year. https://t.co/pvgY6hc3aG

He tested positive for COVID-19 last week and was unable to be vaccinated due to medication he was already taking for pneumonia.

He died with his family by his side. His daughter, Helen, said they were laughing and joking with their father during his final few hours.

Captain Moore’s charity work undoubtedly inspired the nation as the people of Nottingham paid their tributes to him.

One student from Nottingham, Polly Turner was so inspired by himfundraising that she started her own fundraising.

Polly tried to emulate Captain Tom’s fundraising and she decided to a marathon in her garden to raise money for the NHS.

i WANTED TO HELP THE NHS

AS THEY HAVE HELPED SO MANY PEOPLE DURING THE PANDEMIC

During a time where it was hard to find any positives, Sir Captain Tom Moore lifted the nation and brought a sense of patriotism and pride to the country that had been missing for a long time.