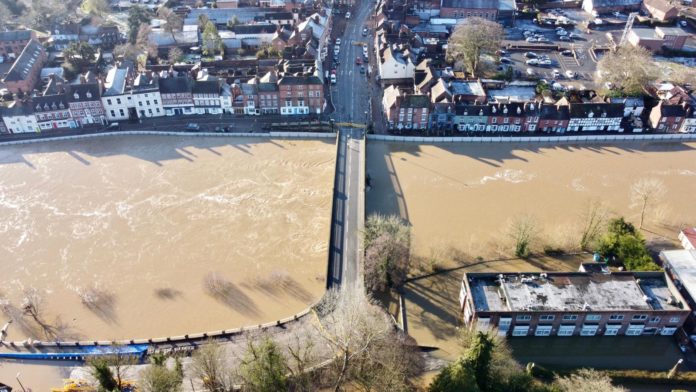 As the riverside town in Worcestershire is hit by severe flooding for the second time in 12 months, local businesses and other town residents have offered their services and support to those worst hit.

For Bewdley, a small town which lies on the River Severn, flooding is an occurrence many residents are all-too familiar.

After being hit in February last year, less than 12 months on the town has now again been flooded, after temporary barriers gave way.

Maxine Preece, who lives next to the river, has had her home flooded.

She said, “It’s devastating. Some people haven’t even moved back into their houses after the floods last year.”

“We’re lucky we live in such a tight-knit community. I’ve been offered a huge amount of help.” She added.

Video: Maxine Preece and other Bewdley residents were offered support from the community after they were affected by the floods.

Eddie Faulkner and Joshua Skidmore, business partners at CarpetED & MORE, own one of the business owners offering free services  to those who have been affected by the floods.

After starting their carpet and upholstery cleaning business around 15 months ago, Eddie and Joshua received ongoing support from local people and, now a successful and well-established business, want to give something back.

“The past 12 months with the pandemic has hit a lot of people hard, without the added pressure of the floods too,” Eddie said.

For them, offering their service was the obvious thing to do.

“We have the knowledge, training, professional equipment and specialist products to help save a few sofas. So myself and Josh sat down and had a discussion and thought this was the correct thing to do,” Eddie said.

One sofa the men managed to save was only a month old, for a town resident who had only just moved into her house before the flood hit.

Despite them being unable to salvage any carpets due to the water and damp, Eddie said “if we could save at least one sofa and save some people money, then we have done a good deed.”

“Without support we wouldn’t have anything… it’s nice to give a little back”
-Eddie FaulknER and Joshua Skidmore, business partners at CarpetED & MORE

After offering their help, they have received an amazing response on social media, with the original post offering support being shared over 130 times and reaching over 8000 people.

“The support everyone has shown us across social media is unreal. We had neighbours thanking us, a few even showed tears as they couldn’t believe people are so willing to help out, especially a new business,” said Eddie.

The Severn peaking at Bewdley and flooding at Beales Corner. pic.twitter.com/3RSZ7HDfxU

Flood warnings for those situated on or near the River Severn continue, with warnings also for lower parts of the River Trent, River Avon and the River Great Ouse.

For more information and weather warnings in your area visit: https://www.bbc.co.uk/weather/2655781