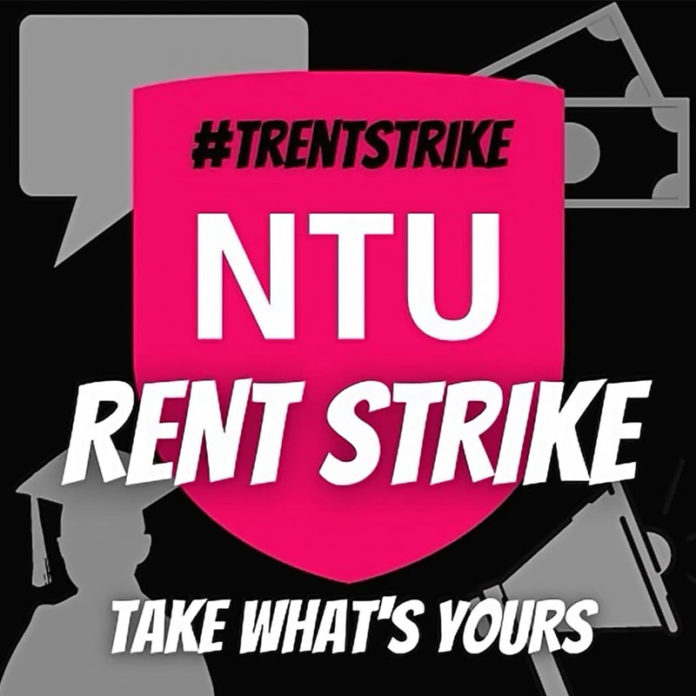 The campaign group Rent Strike NTU are waiting on a response from Nottingham Trent Students’ Union following their open letter that has over 420 signatures.

The campaign group, headed by Masters student Rebecca Hyde and 3rd year Lewis Tibbs, have written an open letter to the SU stating their demands over accommodation payments.

Over 420 NTU students have signed the open letter to the SU and over 480 have signed a petition stating they will be striking and withholding their payments.

1. No-penalty contract releases with full deposit refunds for anybody who
wishes to move out of halls before the end of their contract.
2. 40% rent reduction for the entire year for those who decide to stay.
3. No repercussions for those involved with the rent strike.

The cost of NTU accommodation is on average over £150 a week and for these students they cannot access their rooms due to the national lockdown, being at their family homes.

The rent strike is still yet to hear from the SU and Lewis Tibbs believes it is very frustrating and worrying for students,

“They are paying £150 (a week) for accommodation which by government guidelines they are staying safe and following the rules and their being punished financially for that.”

Although the Nottingham Trent Students’ Union has not yet responded, Nadia Whittome, Labour MP for Nottingham East, has fully backed the support of the rent strike. Taking to twitter, Nadia posted:

The wave of rent strikes on university campuses up and down the country has been impressive and inspiring.

Students have been treated appallingly throughout this pandemic and they are correct to demand their rights.

The group want to speak to NTSU, whom Rebecca Hyde hopes will give them their support.

“Uni of Nottingham’s SU has fully supported our campaign… NTU’s SU really should do the same, they have a responsibility to look after their students at this point.

Rent striking has been growing nationally over the last few weeks with many universities listening to their students and giving them refunds and financial support. This includes The University of Nottingham, Loughborough University, University of Manchester and University College London.