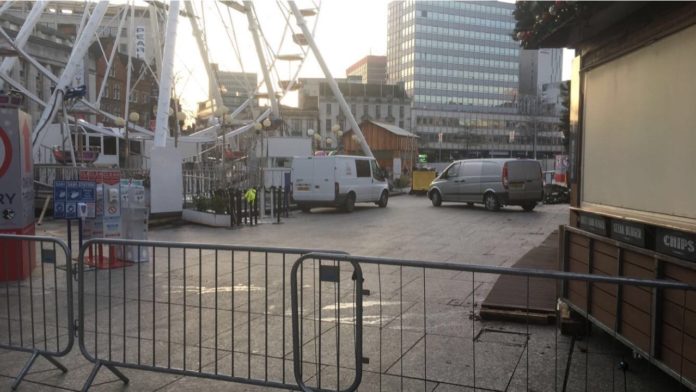 After the closure of the Nottingham Christmas market, City Council leader David Mellen has said it was a fault to open the market in the Old Market Square when they did.

The Christmas market had only been open for one day before being closed on Sunday 6th December. Mellors Group Events and Nottingham City council agreed it could not keep the market open to the end of the year as originally planned.

“I think the issues in the [Old] Market Square weren’t just about the closed-off spaces,” Councillor Mellen says, “They were an issue of the fact it was the first time people could come out shopping at the weekend, it was a lovely day, Debenham’s had a closing down-sale and people wanted to do their Christmas shopping.”

“WE Perhaps should’ve opened it another day rather than have the open day on the first day, on a Saturday”
David Mellen, Nottingham City Council Leader

The large number of people at the market on the opening day were much more than what Mellors Group and the City council had expected.

“In some parts of the day it was fine, there were lots of people but they were moving, they weren’t putting each other at risk by spending a lot of time in close proximity. Although there were some without masks, that’s true.”

In light of the unprecedented high footfall seen up and down the country for retail nationally, we have decided to temporarily close the Christmas market today…

When asked about how difficult it had been to implement social-distancing measures since the national lockdown had ended, Councillor Mellen insisted it hasn’t been any more difficult than before. 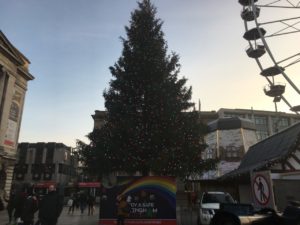 “I don’t think it’s been any different from when we have come out of lockdown. I think it’s always been difficult. People forget… people assume because the infection rates are coming down [that] they don’t need to worry about it. But I think the majority of people actually still do still take all the care that they can.”

Mellen felt that the market could have opened on a later date. “In hindsight, probably the market was a little bit too spread, taking up too much room and we perhaps should’ve opened it another day rather than have the open day on the first day, on a Saturday.”

In the future, Councillor Mellen is hoping that social-distancing policies won’t have to continue for much longer. “The advent of the vaccine means that people can once again be able to be in larger numbers [but] obviously still be careful”.

He also highlighted that some of the pictures that surfaced on social media of the big crowds on the day ‘were not anywhere near the market’ but were instead in busy areas like Clumber Street.

Mellen said, “It’s all difficult, you know, we’ve clearly made a mistake and we’ve done something about that now”.

With the market closed for the remainder of the year, it remains to be seen what will happen to future events in Nottingham.